You are here:
Bez kategorii

Spirulina represents a biomass of cyanobacteria (blue-green algae) that can be consumed by humans and other animals. Dried spirulina contains about 60% (51–71%) protein. It is a complete protein containing all essential amino acids, with slightly lower amounts of methionine, cysteine, and lysine compared to certain animal-derived products. From a nutritional point of view, spirulina is no better than other protein sources, but is more expensive gram-for-gram and may have adverse interactions when taken with prescribed drugs.
Provided in its typical supplement form as a dried powder having 5% water (table), a 100 gram amount of spirulina supplies 290 Calories and is an excellent source (20% or more of the Daily Value, DV) of numerous nutrients, particularly B vitamins (thiamin and riboflavin, 207% and 306% DV, respectively) and dietary minerals, such as iron (219% DV) and manganese (90% DV).
Spirulina was a food source for the Aztecs and other Mesoamericans until the 16th century; the harvest from Lake Texcoco and subsequent sale as cakes were described by one of Cortés’ soldiers.The Aztecs called it “tecuitlatl”.
Spirulina is an excellent product for improving general health and the flushing of toxins. It helps control weight and increases vitality.
This supplement is the most beneficial dietary product that helps compensate for vitamin and mineral deficiencies, anemia, and poor immunity.
The supplement is available as a powder, as capsules, and as tablets. It is produced from 100% ecologically pure algae spirulina and is made to the highest quality standards. 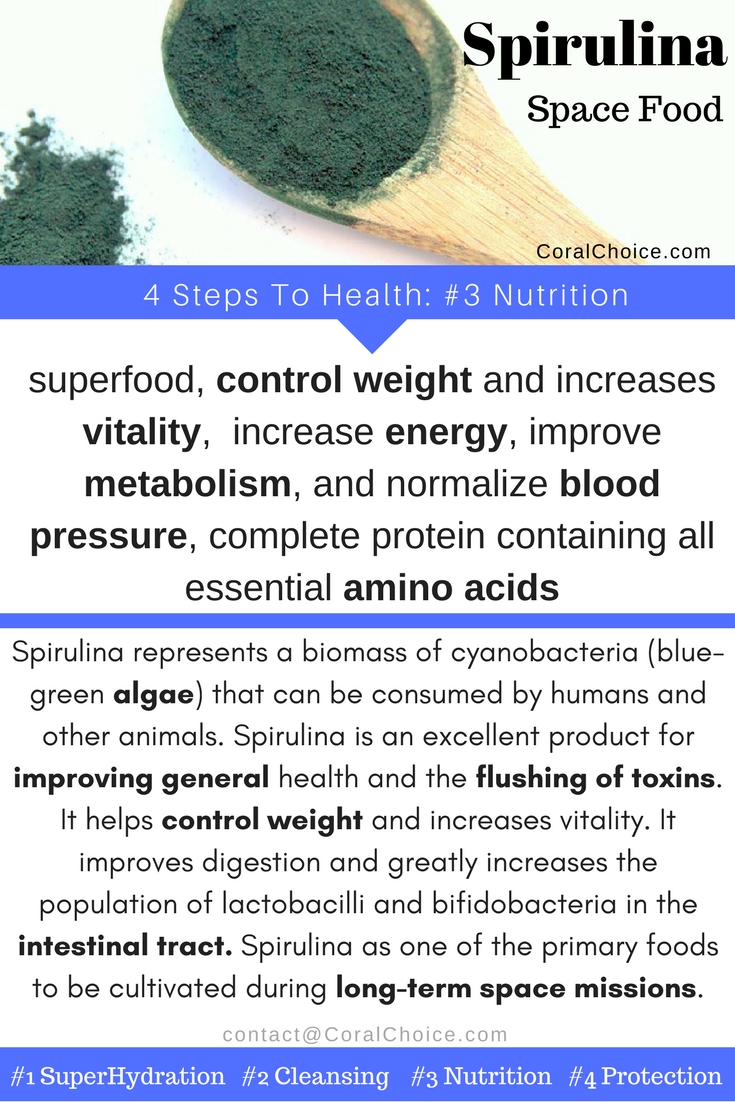 This supplement compensates for protein, vitamin and mineral deficiencies and normalizes protein, carbohydrate and fat metabolism. It contributes to the normalization of cholesterol level in the blood.
This product improves digestion and greatly increases the population of lactobacilli and bifidobacteria in the intestinal tract.
It is recommended for us during periods of physical and mental stress. It is highly beneficial for the elderly and promotes recovery after surgery.
Using spirulina for the period of one month has shown to significantly increase energy, improve metabolism, and normalize blood pressure.
In 1974, the World Health Organization described spirulina as “an interesting food for multiple reasons, rich in iron and protein, and is able to be administered to children without any risk,” considering it “a very suitable food.” The United Nations established the Intergovernmental Institution for the use of Micro-algae Spirulina Against Malnutrition in 2003.
In the late 1980s and early 90s, both NASA (CELSS) and the European Space Agency (MELiSSA) proposed spirulina as one of the primary foods to be cultivated during long-term space missions.
Sources:
Wikipedia
CoralOrder
Please follow and like us: